During the show, we gave a special shout out to our fellow women social media leaders who were unable to join the discussion: Laila Alawa, Salma Bahramy, and Jen Charlton.

We also discussed how inspired we were by the 10 #IWOC awardees who were honored for their exceptional courage and leadership in advocating for human rights, women’s equality, and social progress, often at great personal risk. See list of #IWOC awardees below.

We all agreed that meeting First Lady Michelle Obama was a powerful moment and game changer in our lives!

Our face-to-face discussions with staff from the U.S. Department of State’s Office of Global Women’s Issues (GWI) and Bureau of Public Affairs (BPA) gave us an inside view of how the staff makes things happen in their daily work. We met with Irene Marr from the Office of GWI; Moira Whelan, Deputy Assistant Secretary of State for Digital Strategy in the BPA; Vinay Chawla, Director of Digital Engagement in the BPA; and Hannah Lyons, Public Affairs Specialist in the BPA. To learn more about the #IWOC event and awardees, check out my Pinterest board of resources.

Who are the Fierce Living women that inspire you?

The 10 women who were named 2014 International Women of Courage (#IWOC) by the U.S. Department of State on March 4 and First Lady Michelle Obama are Fierce Living women in my life. The #IWOC awardees were honored for their exceptional courage and leadership in advocating for human rights, women’s equality, and social progress, often at great personal risk. See list of #IWOC awardees below.

Click here to read their full biographies. To learn more about #IWOC, check out my Pinterest board of resources.

First Lady Michelle Obama has always been a Fierce Living woman in my life. Meeting her in person at the #IWOC Award Ceremony was an incredible experience.

Meeting, talking to, and working with my fellow #IWOC social media leaders Kelsey Glover, Salma Bahramy, Jen Charlton, Erin Dunne, Laila Alawa, and Katie Kaestner during the Award Ceremony and meetings with State Department officials gave me a chance to witness how fierce these ladies are. After one day together, they became Fierce Living women in my life!

On March 4, I attended the New America Foundation’s event featuring a conversation with Emily Parker, author of Now I Know Who My Comrades Are: Voices from the Internet Underground. Listening to Parker discuss her experiences with political activists who blog and use social media in the midst of government imposed restrictions on free speech brought back memories of my own trips to Beijing, China and Havana, Cuba. As I listened to her share her experiences with Cuban online activists, I thought of one of my Cuban digital diva sheroes, Yoani Sanchez, a blogger activist and author of Havana Real: One Woman Fights to Tell the Truth about Cuba Today. During the question and answer period, I asked Parker about her interactions with Sanchez. Her comments about Sanchez revealed a deep passion and commitment to telling stories that might not otherwise get told. In that moment, she became a Fierce Living woman in my life.

Today I attended the Center for American Progress Action Fund’s Blind Spots and Double Binds: The Leadership Issues for Women of Color forum. I attended the forum to hear what Dartmouth Professor Elle L.J. Bell Smith had to say about women of color and leadership. Professor Bell has been one of my Fierce Living sheroes for several years. After the forum, I had a chance to meet and talk with her one-on-one. What a Fierce Living moment!

During the Center for American Progress Action Fund’s event, I sat next to Toni Dunton-Butler, Founder/President of A Silver Thread, Inc. Toni has known me since I was in high school. She has been a Fierce Living mentor and friend for numerous years. Spending time with her at the event and having a juicy lunch chat reminded me how blessed I am to be surrounded by so many Fierce Living women.

Tomorrow is International Women’s Day. It is a day to honor Fierce Living women all over the world. One way you can do that is by participating in the State Department’s Instagram and Twitter #WeAreCourage campaign. All you need to do is post a photo of your woman of courage with the hashtag #WeAreCourage.

0 comments on “Headed to the U.S. Department of State’s 3/4 #IWOC #StateMeetup”

I am celebrating National Women’s History Month and International Women’s Day today by attending the #StateMeetup for the International Women of Courage (#IWOC) Award Ceremony which will be hosted by Deputy Secretary Higginbottom and First Lady Michelle Obama. Ten amazing women from around the globe will be honored for their exceptional courage and leadership in advocating for human rights, women’s equality, and social progress, often at great personal risk.

Click here to read their full biographies. To learn more about #IWOC, check out my Pinterest board of resources.

After the Ceremony, I will attend a private policy briefing with a State Department official about U.S. engagement on international women’s issues.

I’ll be live tweeting about the event and sharing photos, podcasts, and videos from 8:00 a.m. to 2:00 p.m. Be sure to follow me on Facebook, Google+, Instagram, LinkedIn, Tumblr, Twitter, Vine, and VoiceBo (podcast). I’ll post a blog recap of my adventures and lessons learned later this week.

Click here to watch the State Department’s live coverage of the #IWOC Award Ceremony at 11:30 AM EST. Follow @StateDept on Twitter and use the hashtags #IWOC to participate in the conversation.

Today, my Digital Sister Janet Johnson sent me a Facebook email about the U.S. Department of State’s application for social media leaders to attend the International Women of Courage #StateMeetup on March 4 in Washington, DC. I met Janet while attending the White House State of the Union Social in January (see photo above where Janet is wearing a red sweater). Through several conversations, we discovered we share a passion for digital citizenship. I am deeply grateful to her for sharing the #StateMeetup information. Her act of sharing represents #DigitalSisterhood and the power of promoting Digital Citizenship (#digcitizen)!!!!

#StateMeetups were created to expand the Department of State’s engagement efforts by inviting social media leaders to attend in-person meetings and engage with the Department through Facebook, Google+, Instagram, Tumblr, Twitter, and other social media channels.
About the International Women of Courage (IWOC) #StateMeetup
The IWOC Awards was created in 2007 to honor women around the globe who have shown exceptional courage and leadership in advocating for human rights and women’s equality. While in the United States, awardees participate in the International Visitors Leadership exchange program where they get to meet with their U.S. counterparts and leaders.
Social media leaders will attend the IWOC Award Ceremony, hosted by Secretary of State John Kerry with special guest First Lady Michelle Obama, at the Department of State on March. They will also participate in a policy briefing with a Department official about international women’s issues. I encourage you to apply to participate in the #StateMeetup. Visit www.state.gov/social for more information. The deadline is February 26 (today) at 5:00 p.m. EST.

My passion for women’s rights is the reason I applied for the #IWOC #StateMeetup. Click here to listen to my podcast about my application. My passion was ignited during my participation in the United Nations (UN) Fourth World Conference on Women in Beijing, China in 1995. Listening to former First Lady and Secretary of State Hillary Rodham Clinton’s “Women’s Rights Are Human Rights” speech at the UN Conference on Women greatly influenced my passion. I have included an excerpt from my book, Digital Sisterhood: A Memoir of Fierce Living Online, below that describes the impact of my participation and Clinton’s speech. 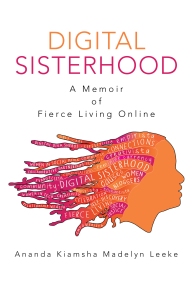 Excerpt from Chapter Four: A Game Changer: Beijing Women’s Conference
One of the benefits of following my heart and living my life passionately in Beijing was meeting women from all over the world. During the NGO Forum’s opening ceremony, I sat with a group of women from Brazil, India, Kenya, Korea, the Netherlands, Russia, Senegal, and Zimbabwe. As the ceremony ended, we stood together and sang Pat Humphies song, “Keep on Moving Forward.” Five lines from that song became my mantra and helped me fully embrace my conference experience as a series of life-changing adventures.
“Gonna keep on walking forward
Keep on walking forward
Keep on walking forward
Never turning back
Never turning back”
One of those life-changing adventures happened when I heard former First Lady Hillary Rodham Clinton give her famous “Women’s Rights Are Human Rights” speech which included the following remarks:

“Those of us who have the opportunity to be here have the responsibility to speak for those who could not.

We need to understand that there is no formula for how women should lead their lives. That’s why we must respect the choices that each woman makes for herself and her family. If there is one message that echoes forth from this conference, it is that human rights – and women’s rights are human rights. Let us not forget that among those rights are the right to speak freely – and the right to be heard.”

Clinton’s words echoed what was in my heart, gave me a clearer understanding of why I was in Beijing, and helped shape my digital path. They came to life when I visited a conference art exhibit organized by the Women’s Caucus for Art (WCA), a national member organization of multidisciplinary and multicultural artists, art historians, students, educators, and museum professionals. While I was there, I struck up a conversation with several WCA artists who were overseeing the exhibit. We talked about WCA’s role as a NGO and founding member of the Feminist Art Project, the conference, their careers, and my life as a budding artist. Before we parted, they gave me their business cards and encouraged me to visit the WCA web site and join the D.C. Chapter.

Walking with Sharon into the NGO Forum’s Internet Café was another life changing adventure. It marked the first time I saw a diverse group of women sitting at computers. My face lit up with a smile as I realized how powerful women could be with Internet access. They were free to speak their minds, discuss their concerns, share information, build community, create web sites and coalitions to address their concerns, and launch advocacy campaigns that defied geographical boundaries. They were demonstrating what Clinton said in her speech: “Let us not forget that among those rights are the right to speak freely – and the right to be heard.”